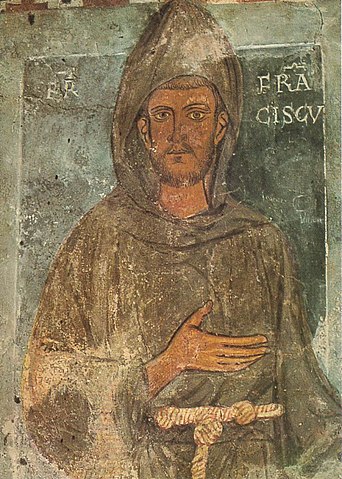 That most humble of men, St. Francis of Assisi — the 13th Century friar who exchanged a life of luxury for one of abject poverty — had a remarkable capacity to recognize the glory of God in all creation.   This is one of his prayers.

“You are holy, Lord, the only God,
and Your deeds are wonderful.
You are strong.  You are great.
You are the Most High.
You are Almighty.
You, Holy Father are King of heaven and earth.
You are Three and One, Lord God, all Good.
You are Good, all Good, supreme Good, Lord God, living and true.
You are love. You are wisdom.
You are humility. You are endurance.
You are rest. You are peace.
You are joy and gladness.
You are justice and moderation.
You are all our riches, and…

The horned wolf stalked a few paces to Einarr’s left and lowered its head, staring down its opponent. It growled and tossed its head as it turned and stalked several steps in the opposite direction. It could not circle its opponent as it wished. When it snarled again, Einarr brought Sinmora up, poised for an overhead strike.

The possessed wolf bounded in for another attack, but as it did it seemed to grow, and its silver fur grew shaggy, green, and mossy. Soon it stood on two feet, no longer a wolf at all. Surprised, Einarr staggered back a step as Einarr and Jorir came to flank him. Runa’s rhythmic chanting had not faltered.

Einarr saw no more wolves: even the one that had watched him hungrily after falling back with its tail between its legs was gone. Now it was just the four of them and a creature that…

I hope you’re having a good one. Now go enjoy your family, friends and/or loved ones. Story returns on Thursday.

The exposed slate of the cave walls shone white in the moonlight, a gaping maw of blackness beneath daring them to enter the Woodsman’s lair. Einarr whistled through his teeth – one long, one short, one long again. Rustling in the underbrush signaled his companions’ arrival, and so Einarr pointed ahead at what Runa had found. “Perhaps we haven’t entirely lost fortune’s favor?”

Runa kept her voice to a whisper when she snapped back. “We wouldn’t have any way of knowing that even if we’d arrived in the middle of the afternoon.”

“Think you’re up for climbing a tree, Irding?” Einarr was thinking aloud more than anything. “We’ll need a lookout anyway.”

“Think I’ll manage somehow. I don’t suppose I could get another pinch of willow bark to chew?”

With a harrumph, Jorir tossed him…

Einarr kept a nervous watch while the others saw to Irding’s field dressing, neither of them certain how much good a watch would do in a wood where the trees themselves might rise up against you. Erik, being not terribly skillful with medicine, inspected his son’s maille while Runa and Jorir did what they could for his ribs.

“That bear ripped into it pretty good, Irding.” Disgust filled Erik’s voice. “You’re sure the stenjätte didn’t damage it?”

Irding grunted in pain. “Jorir checked it over on the boat, same as yours.”

“Is it still wearable?” Einarr did not look back at them. Worrying about wolves at this point probably wouldn’t do them any good, but he had heard them, earlier. A wolf pack ambush, now, might be more than they could handle.

“Oh, sure, long as nothing tries to stab him in the chest again. The links aren’t broken –…

As though on cue, the forest itself seemed to come alive around them. The grass and the twining berry vines that trailed along the ground reached up to grab his boots, and the bushes and brambles around the clearing began to visibly grow into a wall. So much for not attracting attention.

“Run!” Einarr suited words to action and sprinted for the far edge, around the bear, hoping the others would be quick enough to outpace the rapidly coiling plant matter. Runa he had no fear for, as she still sat on his shoulders.

Erik practically stepped on his heels, he was so close, and Jorir was right behind him. There came a crash of breaking branches and a curse from Irding. Einarr turned in time to see the man’s axe raised high.

It was too late. The iron axe blade chopped down into the vegetation and Irding…

A roar reverberated through the trees as the creature caught the scent of humans. Its unnatural red eyes started directly at Einarr and its lip curled up in a snarl, revealing massive fangs.

Einarr slid Sinmora from her sheath. Avoiding the bear was not an option, not now that it has seen them, not with the look of madness in its eyes.

Erik and Irding moved up to flank him, their axes in hand. Good.

Runa stepped up behind them then, and the sweet soprano of her voice carried past them. It was not the fury-song, however. Instead, she sang to end the rage – not for them but for the bear.

It swayed on its feet as though drunk, Runa’s song warring with some other influence. The Woodsman’s, perhaps?

The horned creature began to look drowsy, and Einarr nudged Irding to begin circling around.

The difference between the Woodsman’s territory and that the hulder still clung to was stark and immediate. It was more than the absence of signs of fighting: in the area around the hulder village, the wood was open, like a well-tended garden. It looked as though man and beast alike would have been able to gain what they needed from the forest. Where the leshy controlled, however, was a riot of plant life and swarming bugs, so thick that anything larger than a rabbit would need to pick their way carefully through the underbrush in places.

Einarr frowned, wishing not for the first time that putting Erik and Jorir in the lead to cut their way through wouldn’t draw the leshy’s attention. Unfortunately, however, he was even more certain now than he had been before that the spirit was a stone-fisted tyrant who kept a careful watch over his demesne…

Auna left them in the meeting hall under heavy guard after giving Runa the lines she would have to inscribe. She, then, wandered off into a corner of the room, muttering under her breath. From the cadence, it sounded as though she were practicing. There had been nothing to write the spell in, after all, save perhaps the dirt of the floor – and under the circumstances that would be dangerous.

Irding let out a long, heavy sigh and lay back on one of the benches in the room, his hands folded behind his head, staring at the ceiling. Erik folded his legs under him where he stood and pulled out his axe and whetstone. The blade was still dulled from the fight against the stenjätte, but he had ceased to grumble about it more than a week ago. Jorir likewise sat, but he began with a careful inspection of…

By Michael Clark and Susanne Schuberth

What is true friendship? With most people I have met, “friendship” is very conditional. If I do or say something that offends them or don’t meet their “needs,” they turn off and distance themselves immediately. It is a form of conditional love. “I will be your friend as long as you live up to my expectations.” Sad to say, this is the kind of “friendship” that most Christians endure in that system known as the “Institutional Church.” But was this the kind of friendship that Jesus had with the eleven disciples who loved Him for who He is?

We know that Judas loved mammon. He was the one who held the money bag in the group and finally betrayed Christ at the end for thirty pieces of silver. We also know that the seventy other disciples that Jesus sent…